In Twisted Threads, we meet the femme fatale assassin Akira and the young charmer Devon Lyons on the Merry Mermaid cruise ship for a dangerous voyage. Nothing is what it seems, not for anyone. Akira's target is Devon's family, but something far more sinister is going on than any of the passengers know.

The book spends a lot of time developing the relationship between Akira and Devon. It is very sweet in a lot of ways, though readers should be aware that there are several sex scenes, some of them very long. Sometimes their interactions are ridiculously sappy. Akira is a far more interesting person than Devon, who is largely a young, charming, attractive rich guy. His experiences with Akira and her merciless world do make him grow up a bit. Devon does not think in terms of lethal, horrible violence while Akira clearly does.

The overarching plot is fairly complex, involving old crimes. There are deliberately a lot of unpleasant people on this boat. The cruise ship atmosphere is sometimes a bit tedious and the plot can plod along a bit slowly. It seems like the romance drags the story off track from time to time.

As a heads up, there is a bit of female on male sexual assault. It's believable for a number of reasons.

It's a nice change to see the battle-hardened woman pairing off with the socialite young man as it's an interesting reversal of the typical roles. The sex scenes do drag occasionally, but overall it's a stimulating, complex mystery plot with nice action-filled finale. Well worth your time to read.

"With one swift movement, she raised her sword above her head and brought it down hard and fast across his neck. She pulled the blade back, sending blood spraying across her face. Another body fell to the floor."

About the Author - Kaylin McFarren 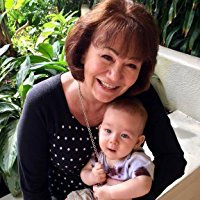 Kaylin McFarren has received more than forty national literary awards, in addition to a prestigious Golden Heart Award nomination for Flaherty's Crossing—a book she and her oldest daughter, Kristina McMorris, co-authored in 2008. Prior to embarking on her writing journey and developing the popular Threads action/adventure romance series, she poured her passion for creativity into her work as the director of a fine art gallery in the Pearl District in Portland, Oregon; she also served as a governor-appointed member of the Oregon Arts Commission. When she's not traveling around the world or spoiling her pups and three grandsons, she enjoys giving back to her community through participation in and support of various charitable and educational organizations in the Pacific Northwest and is currently the president of the Soulful Giving Foundation—a nonprofit focused on cancer research, care, and treatment at hospitals throughout Oregon.

For more information about McFarren, her writing process, and her books, be sure to visit her website.