Call Numbers is a captivating drama. It might also have readers looking at librarians in a new light. Very rarely do we get to see inside the lives of these supposedly meek and quiet professionals, but in Call Numbers, readers find out their lives are the same as everyone else.

Librarians fall in love. They also have arguments and may not be as nice as most people might believe. The main character, Robin Walker is a sarcastic 19-year-old with violent behavior working as a librarian. He is transferred to the 58th Street Branch Library where he believes professional success will happen. He quickly learns that everything changes in a new work environment, and gaining success isn't as easy as he thinks. He may not deal well with it but his character and the other's do grow as the story progresses.

Along with Robin Walker, there are several other characters. Each one has his or her own subplot. This can get confusing since the transitions from character to character aren't always clear, but it also helps to lighten the negativity that Robin emits. Call Numbers might be a story about librarians but it has a dark side that might not appeal to all readers.

Syntell Smith brings the 1990's back in Call Numbers. For many readers, this will be a nostalgic trip. Every detail brings that decade back to life, including technology. Librarians will also appreciate the accurate references and descriptions of how the public library functions.

This is the first novel by Syntell Smith and his style of writing is easy to read. He also creates a realistic and interesting dialogue between characters. It is this dialogue that keeps the story moving along. It also helps to keep readers abreast of which character's story they're following.

Smith knows that every good drama needs intrigue, suspense, and mystery. He doesn't disappoint in Call Numbers. The ending will leave readers on edge, anxiously waiting for the second installment in The Not So Quiet Life of Librarians series.

Anyone that has ever wondered what a librarian's life could really be like, will find Call Numbers a fascinating look into their lives. While this is a dramatic fiction novel, readers will still find themselves paying a little more attention to librarians in general.

"I believe there must be some mistake," Sonyai said calmly. Robin tilted his head and observed the two questionably. "Ouch, isthat any way to greet a new employee?"

About the Author - Syntell Smith 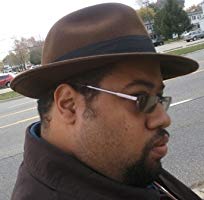 Syntell Smith was born and raised in Washington Heights, Upper Manhattan in New York City. He began writing while blogging his hectic everyday life experiences in 2004. After gaining an audience with a following of dedicated readers, he studied scripts and plays and got into screenwriting. "Call Numbers" is his first novel that he plans to develop into a series. He loves comic books, video games, and watching reruns of Law and Order. Syntell is active on Facebook, Tumblr & Twitter, and currently lives in Detroit.