Man O' War by Daniel Jones is an awe-inspiring piece of fiction that will delight its readers until the very end. This science fiction thriller novel zaps the reader into the year 2153 where the world is a very different place, a darker place. The reader first meets a jelly-fisherman Dhiraj Om as he tries to make ends meet by bringing a big haul on board, but he catches more than he could ever imagine. His life is forever altered by a highly valuable pleasure robot (kokeshi) called Naomi who he had the unlucky fortune of pulling aboard his boat on extremely cold night.

The future is not bright and filled with wonder; Daniel Jones had constructed a world filled with technology and prospects but with a seriously dark and corrupt underbelly. No stone is left unturned by the author in creating such a world, so very like the current world we live in and yet so very different. Man O' War doesn't completely detach itself from reality, like some other science fiction novels, as it still contains some landmarks, like Tower Bridge, to give the reader some familiarity in an unfamiliar world.

While the novel starts with Dhiraj Om it doesn't stay solely focused upon him. Instead the author peers into other people's lives telling their stories and views upon the world they live in. Jones lets the reader delve into the life of D'Souza a crime lord who owns various sex clubs and Kokeshi and Tilda a cop trying to crack down on the use of the sex robots and clean up the town. Rather than being a one dimensional linear story, Jones has perfectly intertwined these characters and others into the storyline showing there different motives and drives surrounding the situation they have found themselves in. Man O' War showcases Daniel Jones' skill at being able to intertwine his characters into each other's story, from the jelly-fisherman being pulled into D'Souza's crime life to Tilda the cop being pulled into the political business of Kokeshi production. The author lets every character tell their story in their most authentic way creating a delightful read for everyone.

While there are a lot of science fiction tropes within Man O' War such as the use of technology throughout, the human element of the created world and the story is not forgotten. It can be quite easy to become so wrapped up in the traditional tropes but the author has found the perfect balance between science fiction and the human condition. Every character, even the bad guys, in the novel become someone that the reader is emotionally invested in at some point of their story.

Daniel Jones has created a truly immersive experience through his background, location and descriptive writing. This book is a true work of passion, one that will delight readers for years to come. Every chapter, every new point of view leads the reader further down the rabbit hole, deeper into the seedy underbelly of 2153's London. Man O' War will leave the reader wondering just how all the ends are going to come together, hooked on every chapter, every conflict desiring a satisfying conclusion. They will not be disappointed.

" 'You know how hard it is to track one of those things when they're made on the black market? Unregulated? Plus these things look like humans. They're not like the bloody coffee machine. Have you seen them?' "

About the Author - Dan Jones 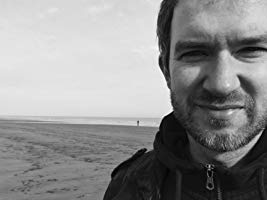 Away from the page, Dan works for a UK Government innovation agency. He has delivered strategic technology roadmaps for the aerospace, space robotics and cyber security sectors, at both national and international level. All of which comes in rather handy when coming up with new ideas for science fiction stories. He has published short stores with rising indie publisher Woodbridge Press for their anthologies The Haunting of Lake Manor Hotel, and Journeys. His non-fiction work, Eat Yourself, Clarice! is a Lacanian study of Hannibal Lecter and western low culture. The second edition was published in February 2017. Dan was born in Forest Gate, east London, and now lives in Essex with his wife and two daughters.