The first book in The Department series will intrigue you and leave you excitedly awaiting the next installment. Jutta Kopp has created a world where humans and creatures of the night coexist in an unusual way.

Revelations will hold your attention as trouble rears its head. There is mystery, murder, and the hint of romance. You have to follow the complicated relationships of several characters. This could become frustrating, but Jutta Kopp has made it fun and endearing.

The descriptions paint the characters and scenes in the readers' minds. Readers will be intrigued by the relationships between such diverse characters. Judy, Hal, Jett, and Raid are all very different from one another, but it is their differences that help them succeed in solving the mystery and create their unique relationships.

Parts of the story may be disturbing to sensitive readers due to the graphic violence. However, due to the types of characters presented, this is what also makes the story believable in a fantastical way. Readers know that several of the heroes are vampires and one is an angel. Without some mention of blood, these characters would not be believable.

Revelations has a playful side as well as some thought provoking aspects. The characters have their struggles. One is also faced with serious self-examination. Be prepared for a new twist in relationships in the world of good and evil.

"Recently, she had dreams, odd ones. They were not really that bad but quite intense." This is a great foreshadowing as it is part of the introduction of the main character, Judy, and her unusual characteristic.

This book is geared more for adults due to the occasional violent content as well as the frequent innuendo between the characters and near sexual situations. The plot is interesting and moves at a steady pace. The characters are well developed.

Revelations does hint at another book to come and because the characters are so endearing, it leaves the reader hoping it won't be long until the next book is available. Whether you are looking for a new type of mystery with a unique investigative team or a unique story about creatures of the night, Revelations makes the grade. It is a good start to what promises to be an enjoyable new fantasy series.

"Recently, she had dreams, odd ones. They were not really that bad but quite intense."

About the Author - Jutta Kopp 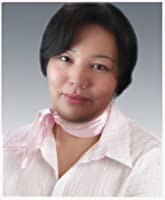 Jutta Kopp is an author, health consultant with further training as an Equine-assisted therapy instructor and horseback riding instructor. She loves to create her own book covers and artwork related to her books. She also creates her own music. Born to a Korean mother and a German father she is bilingual and fluent in English and German. She also speaks Korean, Japanese and a little French. Horses are her passion but she is also well versed in martial arts and just loves anything that has to do with the paranormal.