Girl on the Train

Rachel is a woman "who has lost control over everything, even the places in her head." In the past two years, she lost her husband, her home, her job, and her self-respect. Now she spends her days taking a train to a pretend job while fantasizing about a couple she glimpses from the train. The couple, Scott and Megan, happens to live four doors down from Rachel's ex-husband, Tom, and his new wife, Anna. Although Rachel tries to remain distant from Tom and Anna, her growing reliance on alcohol thwarts her efforts.

One day, after Rachel glimpses Megan kissing a strange man, Megan disappears. Rachel knows that something bad happened to Megan. She believes that she has information that will help the police find her. The police discount Rachel's evidence because she is a mentally unstable alcoholic. Then Rachel's attempts to find Megan lead her into a dangerous situation.

The Girl on the Train studies the themes of self-awareness, despair, expectations, and loss. It is told from three first-person viewpoints: Rachel, Megan, and Anna. The author deftly gives each woman a distinctive voice. Though the women are similar in their sense of their bewilderment about their circumstances. Life has not met their expectations. What these women thought they could find in a relationship with a man has eluded them. From their point of view, the male characters are oblivious to their needs.

Many of the reviews of this novel have compared it to Gone Girl. Like that novel, The Girl on the Train is an adult literary novel that uses unreliable narrators to tell a story.What the reader believes to be true is usually a distortion of the narrator's perceptions. The novel moves back and forth in time and viewpoint. This forces the reader to continually shift his or her own perception of the unfolding story.

The mystery of what happened to Megan will keep you reading until the end. The novel is well written; it richly conveys both place and mood. Ultimately though, the book does not satisfy. None of the main characters are likeable or sympathetic. Because it's difficult to care about them, it's difficult to feel attached to the story.

"The holes in your life are permanent. You have to grow around them, like tree roots around concrete; you mould yourself through the gaps."

About the Author - Paula Hawkins 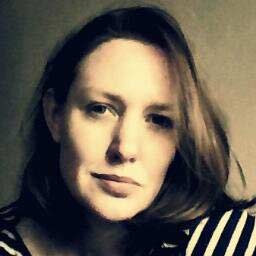 Paula Hawkins worked as a journalist for fifteen years before turning her hand to fiction. She lives in London. The Girl on the Train is her first thriller. It is being published all over the world and has been optioned by Dreamworks.

Paula completed an interesting reading Q&A which can be found online here.