Volunteer Santa turned author Don Kennedy is back with the second installment in his three-book series describing his adventures over the past 25 years. Kids Say the Darndest Things to Santa Clause Volume 2 is a heart-warming and occasionally humorous collection of short stories chronicling his experiences with children and adults.

If you missed the first volume don't worry, Don Kennedy has included a helpful introduction at the start of the book. Readers new to the series won't have any problems following along as Don Kennedy makes appearances as Santa Claus. He does warn readers familiar with the first book that some of the stories in the second one are repeats, but the majority are new for everyone.

Once again, Don Kennedy has made it easy to keep his visits straight. Each chapter deals with a specific volunteer visit. The author shows readers the importance of Santa Claus in children's lives, especially when times are hard. Whether it's at a military base, a shelter for women and children, or a hospital, the author gives readers a touching account of his visits.

There is also a message for adults in Kids Say the Darndest Things to Santa Claus Volume 2. It reminds readers that kids are perceptive and resilient. Children also need hope. This is what Don Kennedy brings to children every time he puts his Santa suit on.

Like the first volume, readers will find plenty of humor in the book. Young love, siblings, questions, and jokes told by kids have also made it in the second volume.

"A few kids later, a little girl came up, stared at Santa, and blurted out, 'You better drink skim milk or 2% milk cause you look really fat!' Her mother was horrified but I told her that Mrs. Claus had me on a new diet. She seemed satisfied with that."

Kids do say the darndest things to Santa Claus and now he's telling all in his second volume in time for the holidays.

"I don't know of anyone I've known who just woke up one day and declared (to themself) that, "I'm Santa Claus!"

About the Author - Don Kennedy 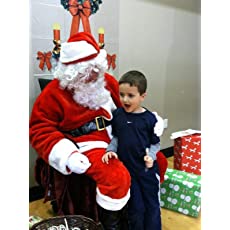 Don Kennedy is a resident of Makaha Valley on Oahu, Hawaii. He was a long time Nevada resident: Reno, Lake Tahoe and Las Vegas. Born and raised in Wisconsin, he's a graduate of Concordia College. Kennedy is a member of the Hawaii Writers Guild. He's a first time author although Kennedy started writing as Editor of his High School newspaper and sports reporter for his local newspaper. He spent the next decade in the radio, TV and publications world. For the past 35 years he's been in the hospitality business as a Marketing executive in seven states: Nevada, Oregon, New Mexico, California, Indiana, Oklahoma and Louisiana.

His passion for the past 25 years has been serving as a volunteer Santa Claus for charitable organizations that did not have the funds to hire a Santa: children's hospitals, boys & girls clubs, women's and children's shelters, military bases, schools, children's recreation centers, fire shelters, churches and everything in between. He loves to read and travel, especially anywhere with lakes and oceans. He's the proud Uncle and great Uncle to two nieces, a nephew, a great niece and a great nephew and also has an older brother. His book is a labor of love recalling first hand stories of kids spending time with Sant