The Long Way Around

The Long Way Around is the second book by author Douglas Cavanaugh. Based in the state that he grew up in Cavanaugh wrote, "I returned to my Iowa roots to write The Long Way Around. I hope my pride of being from Iowa and the fond memories I have of my home state are reflected in the story."

Like Cavanaugh's first book, The Long Way Around is a thriller, but it is also a story about history and family. Readers will follow Ryan from Iowa to Texas and back again, meeting both good and bad characters along the way. By the end of the final chapter, it seems that Ryan has learned the importance of family that includes his wife and son.

Cavanaugh does an excellent job of bringing rural Iowa to life. Readers will feel like they are a part of the tight-knit farming community by the end of the book. The author also accurately depicts events during WWII. The Second World War and life during that time are brought to life and seamlessly woven into the plot.

The Long Way Around hooks readers with questions and wanting to know more. The book grabs you at the beginning and doesn't let go until the end. There is a riddle to figure out and too many interesting characters for the book to start losing readers' attention. This is one of the talents author Douglas Cavanaugh has.

The Long Way Around is a fast-moving story. To help readers follow the storyline each chapter starts with the place, date, and time. You might not think that this is necessary at first, but by the time Ryan is traveling, you'll be glad they're there. This does not mean that the story is confusing, only that it's easy to get lost in the suspense and fast-moving adventure.

In his book, The Long Way Around, Douglas Cavanaugh has created a thrilling and exciting dramatic adventure.

"It's going to be okay. You'll see. In fact, one day you'll look back and regret feeling so terrible now. You'll be elated. Just know this, whichever choice you make, it's going to be fine."

About the Author - Douglas Cavanaugh 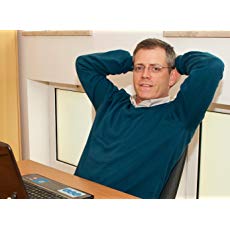 Born and raised in the American Heartland, author Douglas Cavanaugh took an opportunity to travel abroad in the mid-1990s only to return to his home state of Iowa with a heightened desire to experience more nomadic wanderlust. He finally settled in Croatia in 1996. "Living in Croatia from 1996 to 1999 was a bittersweet experience for me. At the time, the country was struggling to recover from the physical and economic devastation that occurred as a result of the war.''
Trips through the Croatian countryside later that decade remained etched in his mind. The vivid images of war and destruction were hard to forget. ''If something good came from those lasting memories of traveling through the area's post-war years, it was my decision to write a fictional account which attempts to avoid blaming or praising any one side for the destruction that occurred. More accurately, Into Hell's Fire tries to show how war brings out the worst in people, and how it disrupts the lives of everybody in the vicinity, not just the combatants.'' Completing the novel was one of the high points of the author's life. "I hope readers appreciate the time and effort that goes into creating a good story. It was more challenging than I had anticipated before starting the project. The experience was a positive one though, and I learned a lot about myself in the process. Hopefully, that will make writing my next novel so much easier.''

Fans of the book are invited to visit the official Into Hell's Fire website at: www.into-hells-fire.com for more info about the author and Croatia.